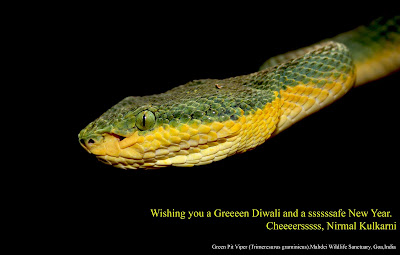 Posted by nirmal kulkarni at 6:38 PM No comments:

The Ladkyacho falls in Surla village forests of the Mahdei Wildlife sanctuary stand endangered due to the threats of dammaing and diversion being proposed by the Karnataka Government. the waters of this falls not only sustain and support a myriad species of endemic and threatened plant and animal forms in the Mahdei Wildlife Sanctuary but are also vital for small farmers and plantation owners downstream in the taluka of Sattari in Goa.
Posted by nirmal kulkarni at 7:40 PM No comments:

This Forest calotes (Calotes rouxi) was documented in Mahdei WLS, surprisingly still exibiting mating colorations, and was also observed to dsiplay head bobbing, a behaviour exhibited to show territorial traits...on close observation another calotes (sex unknown) was noticed in a peculiar position. the forest ecosystem was mixed mosit decidous and it was 12.30 in the afternoon!there has been a marked change in behaviour pattern in herps especially due to the extended monsoons in the Mahdei WLS and perhaps this was a case of the same phenomenon.Further observation in this regard is required to confirm the same.
Posted by nirmal kulkarni at 7:28 PM No comments:

Found this Indian Gliding Snake (C ornata) under a rock on a moss laden sheet rock again. was a juvenile and being early morning...mist and dew and all, appeared listless for some time.
Posted by nirmal kulkarni at 5:50 PM No comments: 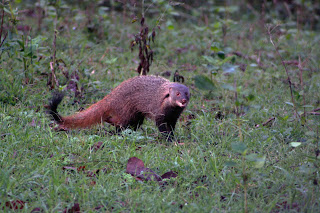 Striped Necked Mongoose documented in Virdi Village.
Two individuals of Stripe- Necked mongooses ( Herpestes vittcollis) were sighted and photo documented in the moist deciduous forests of Virdi village of Dodamarg taluka in Sindhudurg district of Maharashtra. This area is contiguous to the Mahdei Wildlife Sanctuary of Goa and the Proposed Bhimgad Wildlife Sanctuary of Karnataka.
The Stripe necked mongoose is a stocky mammal and is considered one of the largest mongooses in Asia. While specimens from South India are a darker rufous color, while those sighted in the Virdi forests were yellowish grey in color. The field identification for this large mongoose is the tail- which is three fourths of the body length and has a black tip which is pointed upwards. The prominent brownish black stripe running from the ear to the shoulder gives it the name the Stripe Necked Mongoose.
It feeds on small mammals and young ones of other creatures including birds and crabs, etc and is a shy elusive creature.
The individuals were seen foraging for smaller life forms in a clearing in the forests and one individual was photographed in the process by me.
The species has earlier been recorded from the Mahdei Wildlife sanctuary and the Cotigao Wildlife sanctuaries of Goa and the forests around the Bhimgad fort by various researchers.
Posted by nirmal kulkarni at 6:23 PM No comments: 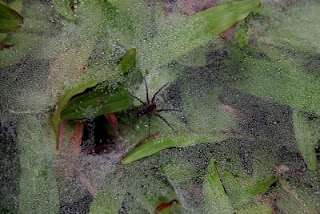 perhaps seen by many in lawns and grasses across the state of Goa, this sheet web spider symbolizes the arrival of the much awaited winters too with sheet webs being covered with dew all over the contryside. the winter is of course here and smaller life forms are now responding to the changes of this phase in the natural cycle just like us humans. this sheet web spider has been adding layers to his web to insulate the heat perhaps or to make the web moisture proof....a behavior aspect that needs more observation and merits more study...
Posted by nirmal kulkarni at 10:32 AM No comments: 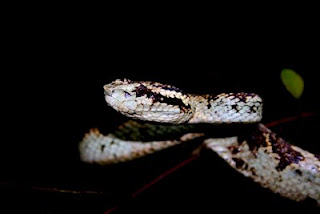 Concern over receding densities of Malabar Pit Vipers in parts of Mahdei Wildlife Sanctuary.
The Malabar Pit Viper (Trimeresurus malabaricus) is an endemic forest species of venomous snake documented in almost all the Protected areas of the state and is known to inhibit, mixed moist deciduous and wet semi evergreen forest ecosystems.
Being endemic to India, i.e. Found only in the country, there have been documented records of almost 6 color variations of this species in the Mahdei region ranging from green to blackish brown and yellow and almost all individuals sport the faint kidney shaped markings on the head region. A nocturnal species, the Malabar Pit viper is encountered in the day only during the monsoons and is known as a sit and watch predator, often lying in one position for hours until a potential prey is in striking distance. Possessing mild venom that causes pain and swelling, this species is capable of fast strikes and feeds on frogs, geckos, small rodents and birds.
The Mahdei Wildlife Sanctuary has been known to offer a favorable habitat for this species in the past but in the recent years, the density of this species in these forests is dropping at an alarming rate. The encounter ratio for this species in the wild has drastically reduced in the last three years, and field records, sightings by wildlife workers and locals, etc are on the decline even as herpetologists are baffled over the issue. With populations of this particular species showing a marked decrease in forest areas like Satre, Zarme, Surla, Hivre Khurd, Chorla Ghats, Coppardem, etc, there are indications that other potential areas too might have the same problem.
Having been documenting the Herpetofauna of the Mahdei Bio Region for almost a decade now, Nirmal Kulkarni, a herpetologist working in the field attributes this to various factors including loss and alteration of forest cover and conversion of forest land to monoculture plantations of Acacia and cashew, etc in several niche habitats of this species in the region.
Another factor that could have resulted in a steady decline of this species in certain areas like the Chorla Ghats include the hard release of other species of rescued snakes, particularly Russell’s vipers and Indian cobras, from urban areas as these species compete for the food base of the Malabar Pit viper and succeed in taking over the food chain, and as such steps to reduce this activity of release of rescued snakes from city habitats needs to be stopped on an urgent basis.
Besides which forest fires, road kills and erratic monsoon patterns could be factors that are influencing the fall in densities according to Nirmal Kulkarni who feels that there is an urgent need to undertake a survey of all endemic species of Herpetofauna in the Mahdei region and map the same along with threats to their habitats on an urgent basis as species like the Malabar Pit viper are flagship species of the Western Ghats and require conservation efforts on all fronts.
Nirmal Kulkarni appeals to the Wildlife Division of the Goa Forest Department to take urgent steps to conserve habitats of the Malabar Pit Viper and curb deforestation and alteration of habitats in the region, besides creating awareness for the conservation of this species.
Posted by nirmal kulkarni at 4:55 AM No comments: