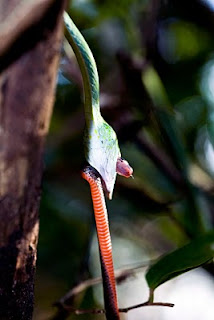 A rare instance of a Green vine snake (Ahaetulla nasuta) preying upon a Striped Coral snake (Calliophis nigrescens ) was recorded by herpetologist Nirmal Kulkarni and his team in the Chorla Ghats forests of the Mhadei Bio region on the 24th of September 2011.

Interestingly, the Green Vine snake is a common partially arboreal species of snake while the striped coral snake is an uncommon venomous forest species that is endemic to the Western Ghats of India.

Earlier the team had reported an instance of a Green Vine snake feeding on a shieldtail snake in the same region a year ago.

The Green Vine snake has been commonly observed on ground in these parts foraging for prey and feeds mainly on lizards, frogs and small birds. It is a mildly venomous snake and the venom is capable of paralyzing small prey.

There is a lacuna of knowledge about this species whose ecology and habitat preference is lest known merely from a few observations. The toxicity of the venom of the coral snake is a matter of study too and so is that of the Green vine snake which is a semi venomous species. Hence the current observations of predator prey relationships with a partially arboreal species are considered important by researchers.

The team observed the striped coral snake being caught at the head region by the Green Vine snake and pulled up from the leaf litter to 1 meter above the ground. The Coral snake was alive for a period of 40 minutes after being held by the Green vine snake and was taken to 5 meters above the ground when it was listless It was then chewed till mid body by the green vine snake for a span of 30 minutes and was swallowed head first followed by the complete snake.

The entire time span of the incident was 2 hours 15 minutes after which the Vine snake proceeded to a higher branch at 7 meters above the ground and settled there in coils for the night.

The approx length of the Green vine snake was 3.5 feet while the striped coral snake was approx 15 inches. Non-intrusive observations and photo documentation were carried out to document the behavior of the two species and the observations will be reported to various herpetology related research institutes in the country through a research note on the same.

The incident was recorded at 657 meters above sea level in secondary forest vegetation and the skies were sunny and bright. The humidity at the time was 78 percent and the temperature was 28 degrees Celsius. Other data including GPS locations and the dominant vegetation in the area was Makad limbu (Atlantia monophylla) and False guava (Catunaregam spinarum). The nearest water source to the area was approx 100 meters away from the incident.

Posted by nirmal kulkarni at 9:19 PM No comments: 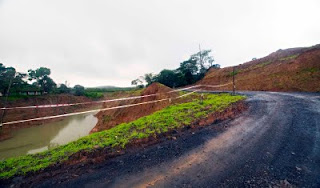 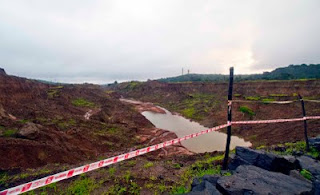 here are the latest images near kankumbi. the road that now connects goa and all the villages from the chorla side to belagum is under threat. the earth cuttings and walls have collapsed and the huge tunnels pose a threat to life and property. while the case is still SC work continues and will start again after the rains. the forests around here are imp corridors for large cats as well as other wildlife and the area is in close proximity of bhimgad as well as mhadei wls.

Posted by nirmal kulkarni at 4:21 PM No comments: