The marsh crocodile (Crocodylus palustris) is better known as the Mange or Muggar in local language and inspires a mixed reaction of awe; fear and respect amongst the communities residing on both sides of the Kumbarjua- Banastari canal. While records indicate that these reptiles were introduced by the Adil Shah of Bijapur in these waters as biological deterrents against enemy soldiers, researchers have often argued that the local population was a off shoot from the main population that once existed off the islands of Chorao and nearby mangrove areas.

Growing up to a whopping 3 meters in length the Marsh crocodile olive brownish in color with a yellowish white underbelly. They usually spend the day basking on the banks or rocks, ready to slip into the waters on slight disturbance, and are a sight to watch with their open mouths and listless bodies simmering in the afternoon Sun. The increased sand extraction activity in these backwaters is causing irreversible damage to the fragile mangrove eco system and the prey base. This includes sand extraction, loading/unloading on banks and sustained deterioration of the mangrove forests in the area.

Over a period of time, there is possibility that these reptiles will come into conflict with human settlements along the banks due to the aforementioned disturbances.

The increased Iron ore barge movement by Barge traffic in this section is also a factor that will affect the habitats of these threatened reptiles and urgent action by State Government authorities is the need of the hour.

Posted by nirmal kulkarni at 5:56 PM No comments: 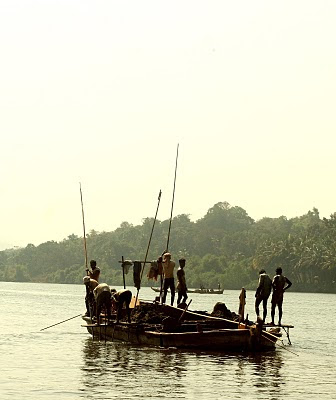 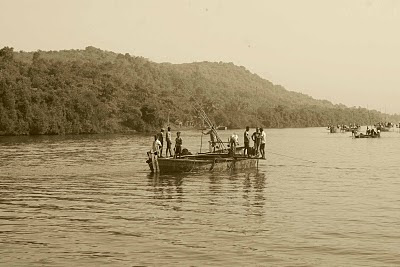 Posted by nirmal kulkarni at 7:44 AM No comments: