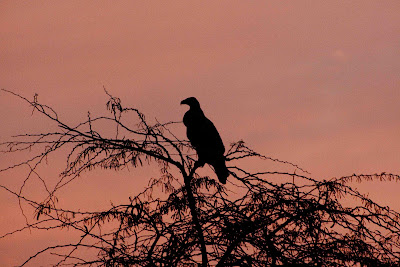 here's wishing one and all a conscious filled World Forestry day and hoping all of us play our roles to conserve the World's last remaining forest landscapes and habitats and create awareness about the same amongst our fellow beings.
Posted by nirmal kulkarni at 5:12 PM No comments: 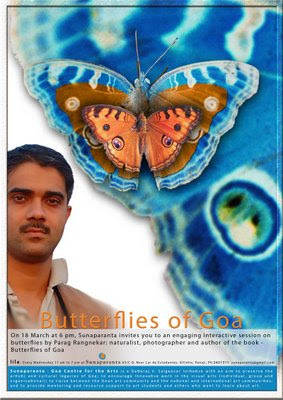 Lila's, Apoorva Kulkarni's brainchild and a haven for thoughts, ideas and exchanges on topics ranging from art to women's issues and flim reviews has opened again, this time at 'Sunaparanta', a space dedicated to nurturing Art and artists at Altinho.
This time around it is Parag Rangnekar, friend and fellow wildlifer on the 18th of March with his favorite and well studied subject-the Butterflies of Goa and it will surely be a talk worth attending on a Wednesday evening at 6.00 pm. Hope to see all nature lovers there!
Posted by nirmal kulkarni at 5:55 PM No comments:

The Mhadei Conservation Facility is being established to provide a platform for wildlife researchers to document and study the biodiversity of the Mhadei Bio region that encompasses the states of Goa, Karnataka and Maharashtra. The region has been acknowledged as a Mega Biodiversity Hotspot as it is a part of the Western Ghats Range and has also been recognized as an Important Bird Area by Birdlife International. The region is a recognized Tiger Conservation Unit (Mark II) and is also known for the discovery of the Mhadei Caecilian, a legless amphibian that is new to science.
The first of its kind in this region, the Mhadei Conservation Facility aims to fill the lacuna of wildlife research on lesser known species of this region including lesser known mammals, reptiles and amphibians and medicinal plant species amongst others. It seeks to document people’s knowledge of the biodiversity, build bridges between modern day scientific techniques and traditional knowledge and bring about an awareness of the Mhadei region and its unique biodiversity.
With just ove two months of completion time left for this dream to come true, the progress of the work is on schedule and with great enthusiasm and vigor, our efforts to welcome the Rain Gods from this facility will surely be successful.
Posted by nirmal kulkarni at 6:52 PM 2 comments:

Asiatic jackals- endangered mammals of our countryside.
It was a concerned comment by a fellow wildlife enthusiast that made me think about the Asiatic jackal, or ‘Kolho’ as it is locally known and every time I pondered about the same I grew restless and impatient as the feverish attempts to locate and observe this once common mammal yielded zero results all across the Goan countryside.
As the senior generation of Goans will agree and fondly remember, the Asiatic jackal was once an important feature of the Goan village landscape, along with peafowl, pariah kites and langurs and was the subject of tales, superstitions and even ridicule at times of local gatherings. The village of Saligao, amongst others I remember used to be known as the village of Jackals and Foxes (and as a school kid many of my classmates from Saligao used to scoff at the mention of the same).
The Asiatic jackal also known as the Golden jackal (Canis aureus), is a medium sized Canid and is considered by researchers as the most typical example of the Genus Canis as far as science is concerned. With a luxuriant coat whose color varies from golden brown to ashy grey and beyond, this mammal exhibits change in coat coloration on a seasonal basis. The underbelly is cream in color and the tail is busy with a visible tan to the characteristic black tip. Being generalists, they are used to adapting to a certain level and feed on rodents and birds, besides being scavengers as they devour left over carcasses both of domestic and wild mammals and birds. Occasionally, Asiatic jackals will also attack poultry and goats, and this leads to Man-aminal conflict in many areas of the country.
But in Goa, the past 2 decades saw the systematic decline of this species due to the rapid urbanization of our villages and the forest habitats that surround them. The alteration of vast tracts of forest lands that connected one village to another are now dotted with high rises and plateaus have been taken over for industrial and housing activity at a pace which is eerie to say the least. Besides which, the use of chemical pesticides have made their way into the prey of these mammals, due to which many local populations, I believe have vanished without a trace, mostly due to poisoning of rodents that have been consumed by Asiatic jackals and a host of other small mammals.
And then there is the question of scarcity natural dens for these mammals, as favored spots including hillsides and stream embankments, natural caves, etc were either frequented with human presence or modified for the purpose of human activity including tourism, irrigation and of course mining activity all of which have slowly but surely taken a toll on the local population of this non charismatic small mammal as some may like to put it.
Trapping and poaching by traveling communities of Pardhis, a hunter tribe has been responsible in circulating a few skins and tail parts of this mammal and traditional medicine use body parts too.
And while this aspect is of prime concern, the fact that the Asiatic jackal is now being targeted by plantation crop owners and farm owners is a growing form of apprehension for ecologists like me as the linkages between crop raiding and loss of habitat and prey are not being understood and hence result in conflict situations across the state.
My last sightings of an Asiatic jackal was 2 years ago in the abandoned garbage dump of Housing Board Colony at Mapusa., and the lone individual was foraging on some dead matter in the wee hours of dawn, and provided me a fleeting glimpse of this long forgotten mammal central to the village wildlife list not many years ago! Another road kill at Mulgao, Bicholim, and two others on separate occasions at Loutolim still confirmed that some individuals were holding on…but an overall study if conducted, or even an estimate will surely present a gloomy picture!
It is thus the need of the hour to comprehend the current losses as far as urban wildlife like Asiatic jackals, Black Faced langurs, White bellied sea eagles and other fauna are concerned and take steps towards their effective conservation, especially in areas where small populations are holding on.
The Forest Department now needs to get their act together, out of protected areas as our urban wildlife is in fact at the brink of systematic annihilation and the graph of man-nature conflicts is on the rise every single day, all across the state.
The fact that we as a people need to understand first that our natural resources including flora and fauna are vital to our local ecosystem is an urgent issue that needs to be tackled at all levels. And while I look forward to hearing some gleam of good news for the Asiatic jackal in the state, I ponder with a shadow of doubt, and pray hoping that it is not too late…
Posted by nirmal kulkarni at 9:38 PM No comments: