Another week and our state will receive the South West monsoons in their glory, bringing joy and abundance to both plant as well as animal life. And while, birds will don their monsoon plumage and butterflies will exhibit like never before, the early showers will also see activity amongst frogs, who will rise from their dormancy and frog catchers, who pull on their gumboots and torches for yet another systematic illegal massacre of Indian Bull frogs, across the state, now an almost annual event for past decade or so.

Indian Bull frogs, more commonly known by us Goans, as Jumping Chicken are on the verge of local extinction, and joint efforts by the Goa Forest Department and the Wild Goa run Save the Frogs campaign needs support for creating awareness as well as providing protection for these species.

Considered as a flagship species of all Indian amphibians, and an important link in any pond, river, and field or grassland ecosystem, the Indian Bull frog is a charismatic species for many Herpetofauna lovers.

Being the largest of its family, this species is distinguished by its large size and tiger like striped pattern on the body and limbs. During mating periods, the males turn bright yellow and the characteristic blue vocal sacs are a sight to see when they advertise their presence.

Once abundant in a variety of habitats that ranged from open grasslands and agriculture fields to ponds, lakes and streams, the Indian Bull frog is now declining in almost all its earlier locales due to the large scale indiscriminate slaughter of this species in the state. Change in land use patterns, indiscriminate usage of pesticides and of course loss of habitat due to development activity has taken its toll is a fact too and worth noting here.

The survival of the Indian Bull frog is essential for the survival of our neighborhood ecology and this needs to be understood by one and all. I fail to understand whether this fact is being deliberately ignored by those who do not have a control over their taste buds and continue to patronize the illegal trade of frog hunting and its meat, Jumping Chicken being served in Goan restaurants, despite an official Ban on the same. But this is a fact. The Indian Bull frog and its tadpole stage plays the role of a bio pest and insect controller due to it feeding habits and was once largely responsible for curbing the populations of mosquitoes and their larvae. Alas, not any more, as the systematic slaughter for the table and alteration of habitats due to rapid unplanned urbanization has taken its toll on this species and the results are for us to see now…epidemics like malaria and other water borne diseases are on the rise rapidly in many parts of the state as soon as the rains set in.

This monsoons, is perhaps a last chance, to reverse the process and begin afresh- by firstly identifying hotspots and then protecting the Indian Bull frogs and their habitats in all parts of the state. This requires every individual nature lover and sensible Goan amongst us to be vigilant and report instances of Frog poaching to the nearest Forest office or Police station for action. Write to the media whose vigilante role has now been established as far as environment protection goes in the state. Speak up to your elected representatives and convince those at the Panchayat and Ward level to create awareness about this issue.

The need for an integrated approach by our Government is crucial now, as its Departments of Environment, Education, Health, Forest and Police need to work together to bring about awareness and enforcement on this vital issue, which is threatening the local extinction of an important amphibian species from the state. I hope our Government takes note of this matter in a more effective manner and helps protect this important species in the state.

And for those who wish to join the larger movement, join Save Goa, a network of nature lovers and wildlife enthusiasts whose sustained efforts for the last 5 years have showed results in some areas. Remember, every voice matters and would go a long way in conserving this important urban wildlife species.

Posted by nirmal kulkarni at 4:27 AM 3 comments: 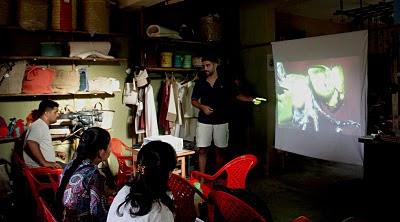 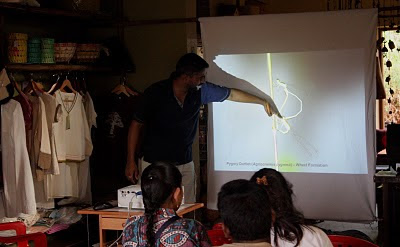 A talk on Odonata (damselflies and dragonflies) was taken by Parag Rangnekar. Parag is the State co-oridnator for Goa Bird Conservation network and also the author of the book 'Butterflies of Goa'
His recent additions to the Odonata of Goa as a research paper are being widely acknowledged as a stepping step to conservation in this regard.
Posted by nirmal kulkarni at 3:08 AM No comments: 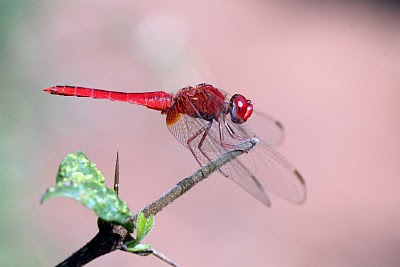 The Southwest monsoons will soon sweep across our parched landscapes draping the lands with carpets of greens and browns. An explosion of life forms will thus erupt bringing to life a myriad of lesser-known creatures including frogs, beetles, moths and their kind and will be a part of our urban lives as long as the Rain God blesses us with his showers.

We at Earthworm wish to welcome the Monsoons with Worm trails and talks on urban wildlife and eco campaigns through the rains and begin with Dragonflies and Damselflies- fabled creatures of the Insect world.

Dragonflies and Damselflies, the much-ignored ‘cousins’ of butterflies are as important as any other insects in our immediate surroundings and are indicators of a healthy environment. Their role as pest controllers in keeping in check flies, mosquitoes and smaller moths is vital in the ecological chain.

Brightly colored and intrinsically different they are a treat to watch and photograph but are seldom admired like butterflies. Threatened due to insecticides and loss of breeding water bodies many species that were once common in our neighborhoods have been lost locally and are now found in small patches. At Earthworm, we aim to create awareness and appreciation for these winged wonders amongst nature lovers as well as laypersons.

We begin with a talk and presentation on ‘Damselflies and Dragonflies’ by Mr. Parag Rangnekar, author of the widely popular field guide of Butterflies of Goa. Besides being an established birder (he is the state co-coordinator of the Goa bird Conservation network), Parag Rangnekar has recently catalogued the Damselflies and Dragonflies of Goa and has been working on the subject for over 5 years. A committed naturalist and wildlife photographer, Parag has been instrumental in popularizing the hobby of butterfly and Dragonfly watching in the state of Goa.