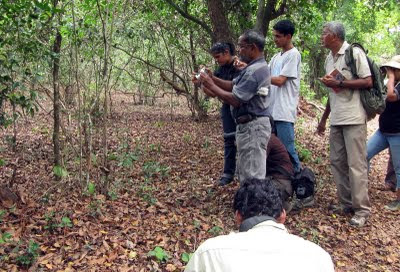 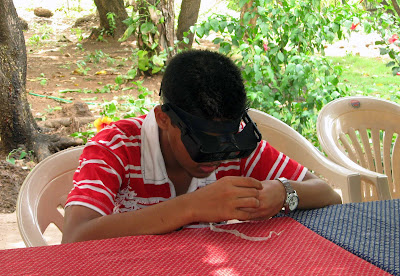 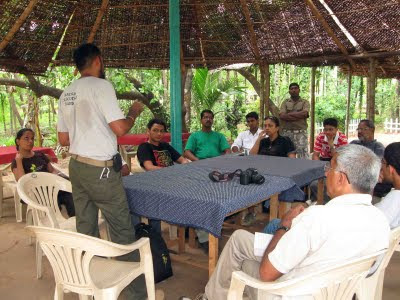 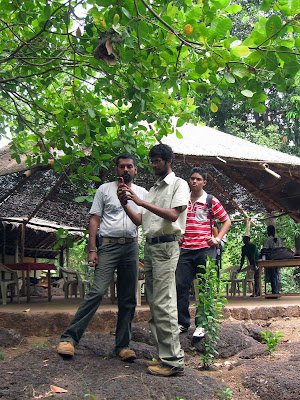 Posted by nirmal kulkarni at 4:29 PM No comments:

Experiences in the Mahdei- a researcher speaks… 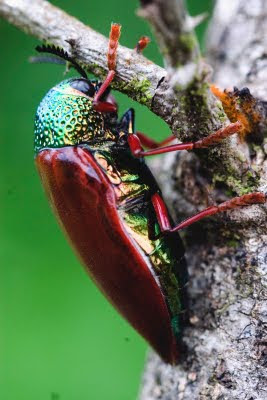 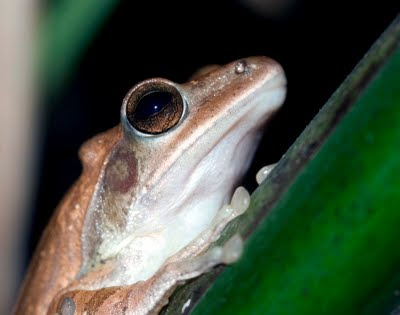 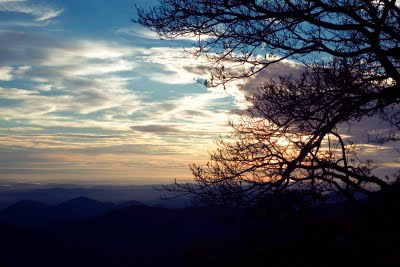 Mornings arrive with it charismatic calls and smells…a distant streak of light symbolizes the presence of the Sun God, that is yet to rise eastward of my position today. I could see a dense layer of cumulus clouds too stretching as far as the eye could see almost drawing a white sheet over the Mhadei valley.

I intend to scout a dense primary forest patch today accompanied by Namdev, not with a particular agenda in mind, but to familiarize myself with this side of the wilds. Without much ado we set out, backpack laden with gadgets and goodies, and rainwear, just in case the Rain Gods decided to bless our beings.

Walking through one of Goa’s most important wildlife sanctuaries, the Mahdei is like literally living out of a dream…deep mystic forests, gushing clear waters of this Mother river, hidden trails marked by large cats and Sloth bears and an verdant green tree canopy that is alive with who’s who of the bird world-hornbills, woodpeckers and paradise flycatchers to name a few! I caress the meter long buttress of a dipterocarp and am awed in its presence. Trees like these are ancient symbols of the Western Ghats forests and need to be revered I tell my self for their contribution to the ecosystems of which we too are a part.

I move on and a wisp of fresh air gives solace to my mind and legs, until I see the movement. An unmistakable green twig stands out on a small shrub and catches Lid’s eye too. My last three steps are taken unknowingly as I face one of our most common and yet charismatic tree snakes- the Green Vine Snake. With an ability to camouflage itself, thanks to its slender body and slow movements in green vegetation, the Green Vine Snake (Ahaetulla nasuta) grows to about 30 inches in length and sports colors from pale green to bright green and occasionally yellowish green, with a pale yellow underbelly.

It is common creatures like these that continue to inspire and awe me and my team to conserve and study these wild tracts that are so crucial to the water security of the state- as the forests of the Mahdei region spread over the political states of Goa-Karnataka and Maharashtra are catchment areas to our mother River the Mhadei river.

The Mhadei river (also spelt as Mahadayi = great mother), Goa’s lifeline, as we all know originates in the lush green forested hills at Degao in Khanapur taluka at an altitude of 940 m above sea level. The river flows westwards around 35 km in Karnataka and then around 52 km in Goa before joining the Arabian Sea. As researchers, ecologists and all those concerned with Goa and Karnataka’s water security and natural conservation have been crying hoarse about the dam projects which would ruin the ecology of the region as a whole, and cause irreversible damage to Goa’s lifeline the Mhadei region and her forests.

I have walked along the course of the Mhadei River time and again for more than a decade now, freezing images of the river and studying the lesser-known wildlife it nurtures. Being trained as a herpetologist and having been part of a team that has discovered two new species of caecilians (legless amphibians) from these havens of biodiversity I have witnessed its various moods and cycle of creation, destruction and again rebirth during varied seasons and spells of the year.

It is magical. The very transformation of a barren tract of forest land into a thick carpet of green on the onset of the southwest monsoons, the sprouting of coral mushrooms, the calls of a Malabar whistling thrush that imitate a naughty school boy all mesmerize every being that walks these forests. I have conversed with sounds of a mischievous wind that builds up in every valley and hill of this region and listened with rasp attention the soft murmur of every leaf that I tread upon…and I feel that this river and its denizens wish to communicate a fact- that the Mhadei and its forests need to be conserved from large scale development projects including mines, irrigation and diversion dam projects and large scale monoculture plantations-all of which threaten to irreversibly damage the delicate ecosystems that the river supports.

The region itself is also steeped in eco cultural legacy and the community protected sacred groves are a testimony to this fact. The sacred groves at Brahmakarmali, Surla, Nanorem and Copardem are of great ecological value. These areas have been conserved by village folk for ages and are a type of nature’s textbooks for those who wish to surrender to nature’s subtle surprises and delve into the realm of the magical Rain Gods that bless these serene tracts. Age old deities, dedicated to the forest Gods stand guard in these forests and these include folk deities like Mahishasurmardini, Gajalaxmi, Betal and Vaghro Dev.

In fact I must admit that I have been privileged to walk trails that lead to many of the myriad waterfalls and streams that dot the hills of this region I suggest the trail to the Hivre and Ladke waterfalls and its precincts just right for that sense of solitude and tranquility that one seeks when one walks the Western Ghats forests at the height of the monsoons and the trip has been forever etched in my heart.

Nature reigns supreme here in these parts, and even the fall of a solitary branch of deadwood makes a sound that evokes response, from all things wilds and wonderful be it jewel beetles and pill millipedes that scurry the forest floor or Slender Loris that scour the canopy heights. Yes, the Slender loris; an elusive and important flagship species of the Western Ghats is seen in the Mhadei and is a natural wonder to say the least. It is about the size of a chipmunk and is an arboreal animal. It spends most of its life in the trees, has slow and precise movements, and likes to travel along the top of the branches hunting alone. Yes, there are many such creatures that have made the Mhadei their home- the elusive pangolin and the endemic brown civet to name a few.

But the one charismatic mammal that has been in the limelight for the past few years for its presence in the Mhadei forests is the tiger. With repeated sightings, secondary evidences like cattle kills and pug marks it is a now a proven fact that the Mhadei wildlife sanctuary is also a large cat habitat.

Add to this other forms of diversity including medicinal plants, avifauna and of course the fresh water fish diversity and it would perhaps take many more pages to even touch upon the array of life forms one can find here. I can go on and on…as the treasures are endless…

The sheer richness of these forests and their undergrowth, the very thought of which still sends shivers of joy down my spine is hard to explain but one must realize that a strong stand needs to be taken to conserve not only the Mahdei Wildlife Sanctuary and its forests but all other Protected areas too as they are the Green Lungs of our state and are responsible for nurturing and sustaining our natural resources which primarily include water and fresh air in the simplest of terms.

Posted by nirmal kulkarni at 4:05 PM No comments:

Talk at Mitsuko trust on reptiles and amphibians for underprivileged children 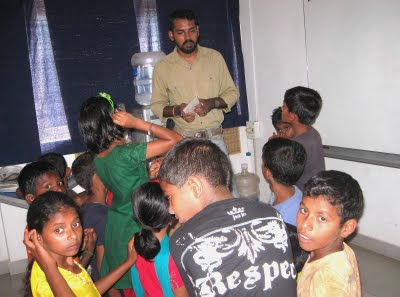 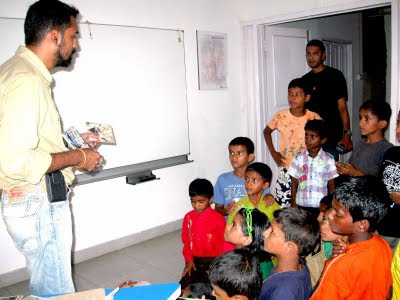 Posted by nirmal kulkarni at 5:31 PM No comments: