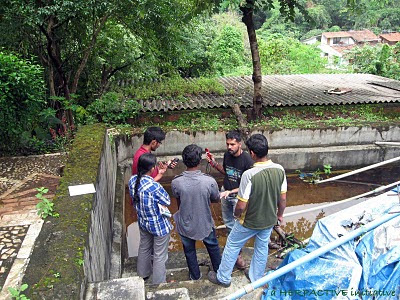 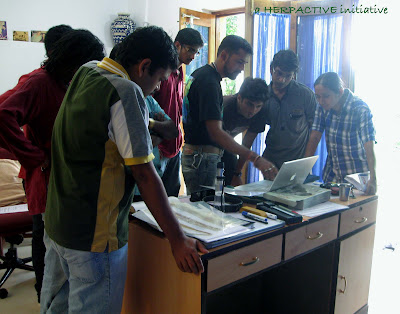 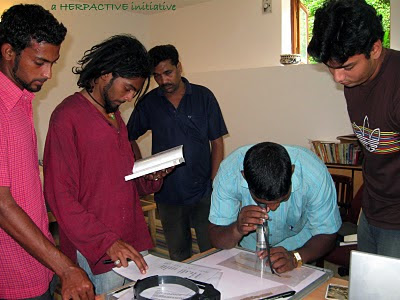 The Do Your Own Herpetofauna Data sheet workshop was conducted at Porvorim by Herpactive, an initiative started by herpetologist Nirmal Kulkarni with an endeavor to encourage the compilation of data on reptiles and amphibians in the state.

Nirmal Kulkarni, Goan herpetologist and ecologist emphasized the need to create and maintain data sheets, interpret data and use it for conservation purpose. He stressed upon the need for wildlife workers as well as enthusiasts to ensure that data collected reached the right channels for collation and interpretation, as this was as essential as collecting data.

Participants used various instruments like GPS systems, temperature and humidity meters, distance finders, etc and were also exposed to various forms of data sheets that are used by herpetologists for species and habitat surveys. A simple demonstration of a taxonomic data collection sheet as an Amphibian survey in a pond was also given.

According to Nirmal, Herpactive aims to promote the science of field herpetology by conducting walks, surveys, training workshops and field technique sessions for budding reptile- enthusiasts as well as laypersons who are in awe of these fascinating and yet lesser known creatures.

He further informed that a 3-hour ‘Tools of the Trade’ workshop will shortly be announced for reptile and amphibian enthusiasts that will teach and demonstrate the use of modern day tools and equipments used by herpetologists in research and studies.

Posted by nirmal kulkarni at 1:09 AM No comments: 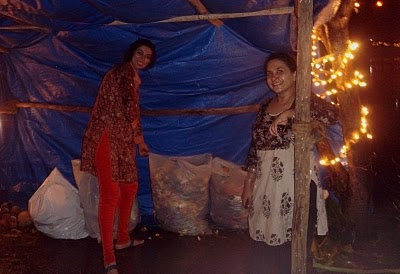 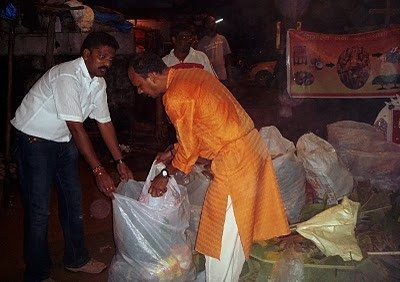 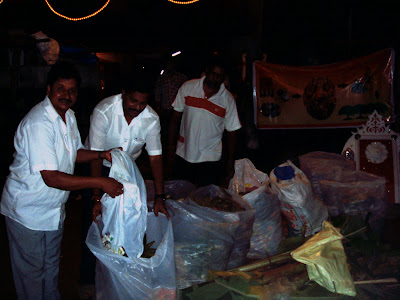 The Nirmalya Collection project began as an intention a month prior to the Ganesh festival with a vision of making a holistic approach to an ecofriendly Ganesh Chaturthi a reality. Roopa Bandekar of Earthworm Ecostore introduced 100% ecofriendly Clay Ganesh idols in Goa for the first time that were painted with natural colours like multani mitti, turmeric and kumkum from Eco-exist Pune and conceptualized the NIRMALYA TRANSFORMATION PROJECT for the Port Town of Vasco.

Although collection of Nirmalya is not in itself new to Goa, but it was felt that there existed great gap between the devotees and the supposed ‘few’ who were concerned about the environmental damage caused during the immersion of nirmalya (such as garlands, flowers, coconuts, plastic and thermacole. The Germ of Vasco ‘I’dea was to ALWAYS keep the in mind the religious sentiments of the people AND include them in the process of change. The method: to make it a people’s movement; to do away with bins at immersion sites and replace them with the welcoming presence of enthusiastic volunteers.

When this ‘I’dea was first sounded off to Mrs. Lalita Joshi, a environmental catalyst and Director of BBA Dept of MES college Zuarinagar, it was accepted with such great enthusiasm that the ‘I’ of that idea quickly dropped and turned into WE….everybody who gave a ear to the idea absorbed it as their own. MES college Team Mr. Kevin Dsilva and Ms Pallavi Shirodkar took on the task of composting the collected nirmalya;

We created posters and Flexes “ Ganpati Bappa Morya, Nirmalyacha roop badluya’ in marathi and Ganpati Bappa Morya, lets Transform our Nirmalya’ in English. And put them up a week before the Festival at Key sites in Vasco, shops, temples, market areas, bagayatdar, at points of traffic movement and relevant shopping sites. The message was spread personally from Temple gurujis, Sarvajanik mandals, house-to-house visits, through institutions, organizations, Banks, offices and articles in local publication Vasco Watch.

Pandals were erected keeping in mind high visibility and accessibility to all at the immersion sites of Khariwado, Vaddem Lake, two at Baina beach and one site at Chicalim with the Panchayat.

Two volunteers at each site along with MMC workers collected nirmalya from the people and most sites segregated at SOURCE from 8:30 p.m. to 2.30 a.m. in shifts or some of them were present throughout the time. The MMC vehicle took the Nirmalya to MES college the next morning for final segregation and composting.

WHAT MADE THIS CAMPAIGN UNIQUE!

· This WAS A PEOPLE’S CAMPAIGN and did not leave the sense of responsibility in the hands on the Government body or a single “NGO”/ organization.

· We consciously kept away from the ‘people versus environment’ approach.

· All Promotional material was printed in two languages Marathi and English languages keeping in mind its target audience.

· The campaign reached from household to household at a personal level.

· The campaign was carried out with minimum costs with a few baskets and enthusiastic volunteers. This helped us not only to understand how many people willingly gave their nirmalya, how many needed to be requested and what were the reservations of the unwilling but also to make recordings for the future.

· Different sites have different volumes of nirmalya collection on different days; we learnt that in some places 10 bags are not enough at all and in some areas a few suffice. It gave us information to plan for the future.

· Dinner can be Prasad! Prasad IS dinner!… the sharing of Prasad between the devotees and the volunteers and the quantities consumed by each volunteer, itself suggests that this was a project that sent great vibrations back to the earth!

And as Daji put it “Now my whole car smells of Nirmalya.” makes this project one of its kind!

IT WAS AN OVERWHELMING SUCCESS!

Most of our volunteers despite having their own household celebrations gave time, effort and enthusiasm to this project proving that where there is a will there the time.

All of us felt that much of the general public were concerned and ready for solutions.

Many devotees who had reservations were reassured by our presence and positive approach.

Our collections were almost 60% successful at all our locations.

Our immersion sites showed visible less damage the next morning.

We plan to continue the same awareness campaign with all the learnings of this one for the next years to come. And thank Each and every person who handed their sacred Nirmalya to us thus became a part of “We” project.

First Record of the Jerdon’s Red Spotted Pit Viper from the Republic of India. 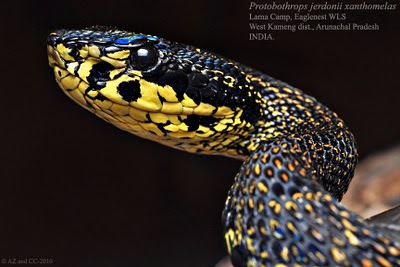 This venomous sub-species of Jerdon’s Pit viper is an addition to the 278 plus species of snakes documented in the country. With the addition of this species, the number of pit vipers found in India has risen to over 21 species.

The earlier records of this snake are from central and southern China, from Henan, Shaanxi, Gansu, Sichuan, Guizhou, Hubei and Guangxi Provinces. The current range record of this subspecies from Lama Camp (West Kameng district, Arunachal Pradesh, India) is a range extension of approximately 1,200 km southwest from Sichuan in China - the nearest area where the Jerdon’s Red Spotted Pit viper (P.j. xanthomelas) has been reported.

Four individuals of this snake were found by the team that included Amod Zambre from Pune, Chintan Sheth from Bangalore, Shashank Dalvi from Mumbai and Nirmal Kulkarni from Goa. All the individuals were found at 2,350 meters above sea level.

Pit vipers are highly evolved venomous snakes belonging to the sub family Crotalinae that have deep pit, or fossa, in the loreal area between the eye and the nostril on either side of the head. These loreal pits are the external openings to a pair of extremely sensitive infrared detecting organs, which in effect give the snakes a sixth sense that helps them to find and perhaps even judge the size of the small warm-blooded prey on which they feed

The team has thanked Ramana Athreya – Kaati Trust/Eagle-nest Biodiversity Project who provided funds to survey Eaglenest WLS, snake taxonomist Ashok Captain for editing and reviewing the manuscript; Indi ‘babu’ Glow for everything in Eaglenest. Kesang, Phurpa, Maila, Khandu, Jetha, Neema and Dorjee for their tireless help during field work. The team has also thanked the Arunachal Forest Department (especially P. Ringu and G. N. Sinha) for permissions to work in the area.

Posted by nirmal kulkarni at 5:40 AM 3 comments: