An uncommon species of snake documented in Chorla Ghats area. 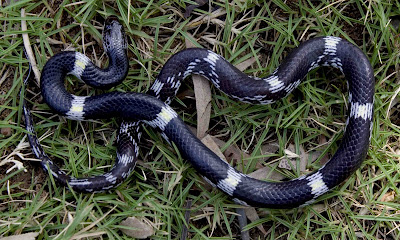 red Wolf Snake’ (Lycodon striatus).
A slender bodied snake with a flattened head and a glossy black back inter spread with a series of white bars across its body, which diminishes towards the tail. This species has interesting faint yellow colored mid spots that resemble the shape of diamonds when observed from close and are a key to its field identification along with the characteristic white lip scales that this species possess!
The Barred wolf snake is a shy nocturnal non venomous species of wolf snake with a very mild temperament and is known to hide its head under its own coils when provoked or disturbed, thereby turning itself into a peculiar ball of coils!
Growing up to a length of 43 cms maximum this species is known to display parental care of its eggs and its clutches include anything from 2-4 eggs which are laid in July and August. It is known to feed on geckos and skinks and
Known to inhabit semi dry and fringe forest areas, the Barred Wolf snake has been reported in Goa earlier from the Mollem National Park by the then RFO Mr. Prakash Salelkar a few years ago. This specimen however was recorded from a grass patch near a human settlement in the Chorla Ghats area and was observed to be foraging in search of prey in the night.
Though known to be common in the country, there have been very few records of this species in this region. The documentation of this species in the Chorla Ghats makes the number of wolf snake species found in this region to three, which includes the Common Wolf snake, the Travancore Wolf snake and the Barred Wolf snake. The Chorla Ghats area in particular and the Mhadei Bio Region in general is being increasingly recognized by wildlife researchers as a hotspot for lesser known biodiversity and the documentation of this species has reconfirmed the need to conserve the niche habitats of this region. 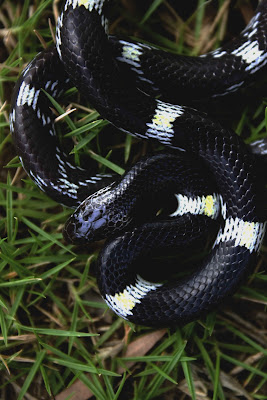 Documented at a height of 400 meters above sea level by Nirmal Kulkarni, a herpetologist working in the area under the aegis of the Mhadei Bachao Abhiyaan, the ‘Barred Wolf Snake’ and many other reptilian wonders await appreciation and protection in this region that is threatened by the Mhadei Diversion Project which aims to irreversibly alter large tracts of rich Western Ghats habitats and threaten the very existence of many lesser known species in the process!
Posted by nirmal kulkarni at 8:31 PM No comments:

Are frog populations in Goa really on the decline?
Yes they are. Frog populations can be assumed to be declining in Goa, just as it they are in the rest of the world. Globally, frog species are disappearing at an increasingly rapid rate, faster than they have ever done in the past 65 million years.
In India, studies in 1999 and 2002 have been conducted by amphibian specialists in coordination with International agencies like the International Union for the Conservation of Nature and Natural Resources (IUCN). Moreover basic surveys and compilation of checklists on different frog species have also been carried out by researchers at the Goa University’s Department of Zoology, the Goa Forest Department in conjunction with local individual herpetologists that indicate their depleting numbers.
There is however, a serious need for long term monitoring of Goan frog populations existing in Goa.

What are the reasons for this decline?
There are a number of threats to the existence of frog species, however in Goa the chief threats are:
Poaching and consumption of frogs without allowing them to breed. At the onset of the monsoons frogs end their aestivation and come out to breed. Selective poaching of the mature bigger adult frogs before the frog can breed, will defiantly lead to a catastrophic decline, drastically reducing the number for a future frog population.
The toxic effects of use chemical fertilizers and pesticides in agriculture. Flooded paddy fields are ideal habitat for frogs. Frogs absorb water through their skin, and thus are particularly vulnerable to the toxic effects of residual chemicals that concentrate in ponds and low lying fields.
Habitat destruction. Rampant filling of fields and clearing of forest cover, besides encroachment on forests by human activities such as mining, construction, etc have possibly caused entire resident populations to dramatically decline within a short period.
Human interference in ecological balance. A significant global trend that is threatening frog populations as a whole worldwide include climate change, global warming, introduction of invasive species and the transfer of disease from farmed to wild frog populations.

Are some species more vulnerable than others?
Yes. In Goa, the two largest species; the Indian Bullfrog (Hoplobatrachus tigerinus) and the Jerdon’s Bullfrog (Hoplobatrachus crassus), are selectively poached for their large fleshy legs, the most prized anatomy of the frog. The Indian Pond Frog, Grass Frog and the Common Indian Toad are also occasionally poached.
An insatiable demand at restaurants for illegal frog meat has ensured a lucrative return to the poacher for a pair of frog legs.
Noticing the dramatic decrease in numbers of these two species; the Indian Bullfrog and the Jerdon’s Bullfrog, are now listed as threatened species that require protection against hunting or harvesting in the Schedule-I List of the Wildlife Protection Act of 1972 set up by the Government of India, as well the IUCN Red List recognized internationally.

What is the law?
The Government of India in 1985 declared a blanket ban on the catching and the killing of frogs under the Wildlife (Protection) Act 1972. This implies that any individual or restaurant detected to be catching, killing, selling, serving or even eating frog meat violates the provisions of the Act. This would attract stringent punishment with a fine of Rs 25,000 and/or imprisonment upto 3 years. In 2008, 10 persons were detained and fined under this act. Repeated offenders can get even more stringent punishment by possibly revoking their commercial licenses.

Ok, but why do I have to stop eating frog? How will it affect me?
A lot more than you realize…
Eating frog meat can jeopardize human health to the toxic chemicals absorbed by frogs from the environment. Due to the massive toxic pesticide residues that accumulate in the fat deposits of frog meat, consumption of frogs can trigger paralytic strokes, cancer, kidney failures and other deformities. Frog meat is contraband and usually processed in unsanitary conditions, with no regulation what so ever.
Frogs are the pulse of Goa’s environment, a very unsung yet crucial component of the ecosystem bridging a vital link as predator and prey in the food chain. Their impending extinction will have a ripple effect on the ecosystem, which we have not yet fully foreseen, by throwing a delicate ecological balance out of gear.
Frogs and tadpoles are voracious eaters, and consume millions of mosquitoes and mosquito larvae every year. One of the suspected reasons for the recent increase in recorded cases of malaria and other vector borne diseases in Goa, can be attributed to the decline in the numbers of frogs.
In Goan mythology frogs are believed to bring prosperity and good rainfall.

How can I help to save our frogs?
Firstly, discourage others, if not yourself from consuming frog meat. If there is no demand for frog legs, frog-poachers simply won’t catch them. Secondly, if you come across people poaching frogs or restaurants serving frog meat, report it to the police (100/108) or any of these Forest Department official’s, preferably at the location closest to you –

About this Campaign
Save the Frog Campaign 2009 is coordinated by WildGoa, a Goa related network of Wildlife enthusiasts and NGOs. Volunteers have put in time and effort to create informative and educative content which is then distributed through local networks, press, radio and local television. This awareness and enforcement campaign has been on for the last 4 consecutive years and is actively supported by the Goa Forest Department a number of local as well as International organizations including Amphibian Ark, SAVE THE FROGS!, Botanical Society of Goa, Organic Farming Association of India, GOACAN, Earthworm, Green Essentials, WWF-Goa, Nisarga Nature Club, Vivekananda Environmental Awareness Brigade, & Mitra. For more information do visit www.savegoafrogs.org or email info@safegoafrogs.org To contact us, you may call any of the WildGoa volunteers mentioned above.
Posted by nirmal kulkarni at 4:26 AM No comments:

Rajendra Kerkar is Big Goenkar 2009: Environmentalist Rajendra Kerkar, who is vying to save the Mhadei river and to have tiger corridor in Goa, has won the Gera Big Goenkar Award 2009, for his work towards environment. In the business category Blaise Costabir received the award for initiating router-modelling business in Goa. The Gera Concerned Citizen away was bagged by Prajal Sakardande for his contribution in the field of history and also for voicing out concerns of Goa. Ecologist and wild life photographer, Nirmal Kulkarni, for is work towards discovering the unknown wild side of Goa and protecting it, won the Big Green Champion Award. Student Natalie D’Silva won the Gera Big Innovation Award for discovering bacteria that can generate electricity
Posted by nirmal kulkarni at 6:03 PM No comments: