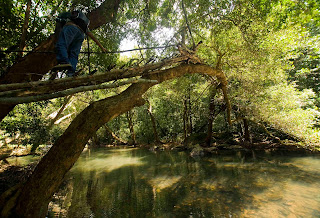 This tree bridge near Kuveshi village, Karnataka India is a link to the crown of the Dudhsagar waterfall. The area is in the reserve forests of Castle Rock and is part of the buffer zone of Anshi Tiger Reserve.
Posted by nirmal kulkarni at 2:49 PM No comments:

The crown of the Dudhsagar falls.

This image is taken from the crown of the famous Dudhsagar falls, and one can see the train pass through the forests of the Mollem national park, Goa.
Posted by nirmal kulkarni at 7:42 PM 1 comment:

Of Panic, pythons and garlands!!

As a field herpetologist I would like to point out that the manner in which the Indian rock python has been held apart, head held above the ground and coils around the neck of the handler is unnatural to say the least and will be the cause of unnecessary torture and stress to this protected species. This photograph shows how a snake can be abused and mishandled, shamelessly enough to capture limelight for a moment worth, perhaps unknowingly too that this act would have grievously caused internal injury to the poor creature.

It is not uncommon to see Indian Rock Pythons being paraded in front of cameras, for photographs or for media interviews in the state. It is in fact a growing trend amongst village youth to catch a snake that has unknowingly ventured in a human dominated landscape with the help of sacks and ropes. This poor creature is then either tied up and kept on display for the benefit of village folk or paraded as a wild garland of sorts for cell phone photographs that are then passed around as acts of bravery! It is only after considerable interest has been lost that the Forest officials are called upon to take the snake away.

I have personally rescued dozens of such so called “rescued snakes” from village squares, homes and even market places, often tied to trees or stashed in gunny bags from all across the state. The Wildlife rescue Squad of the Forest Department and other snake rescue volunteers have had similar experiences too. The conditions of snakes like these that are retrieved include multiple internal injuries, dislocation of ribs and jaws, deep bruises in skins and underbelly, broken teeth and numerous other complications. This is not bravery. Nor is it an act of compassion or saving a helpless creature. It is a wrongdoing.

In short an Indian rock Python caught by an individual or a group of individuals without any lack of knowledge of snake handling or training stands a great chance of irreversibly injuring the large snake, knowingly or unknowingly and needs to be discouraged from doing so by society at large too.

This brings me to the core aspect of the issue. The role of the media is crucial in curbing and discouraging this craze of capturing Indian rock pythons and subjecting them to all forms of torture. Any photograph and clipping of untrained and local individuals displaying this species of snake either around their necks, or as mentioned before held across like a huge rope for the benefit of the camera needs to be discouraged strongly by photo journalists themselves and by the editorial teams concerned.

It is my earnest plea to one and all in the media fraternity to stop encouraging this unnatural practice, as it is not only unethical but also illegal to capture, display and possess a protected species like the Indian rock python without the permission of the Chief Wildlife Warden of the state.

Included as a Schedule I species under the Wildlife Protection Act of 1972, due to demand of its skin in the illegal wildlife smuggling trade, this snake has the highest form of protection accorded to it under the Act across the country and is regarded as one of the flagship species of the reptile world.

While this species is now threatened due to its conflict with humans in the state as its habitats are being converted into concrete jungles across the state, the process of study, rescue and relocation is one that requires skill and study and should be left to professionals and authorities working in this field – i.e. the various trained rescue volunteers who work in coordination with the wildlife ranges in the state. Their numbers can be obtained from the Forest Department and are on call 24 hours a day. There is a dire need to learn to understand the human reptile conflict situation and respond to the same by means of a scientific solution rather than one, which puts the poor reptile in poor light and causes panic and hysteria amongst the minds of the people. In any case, a photograph of a youth holding a snake across his neck does not serve any educative, conservation, or any other purpose. I rest my case. Keep the faith.

Talk for children at Keri organized by Vivekanand Smruti Sangh 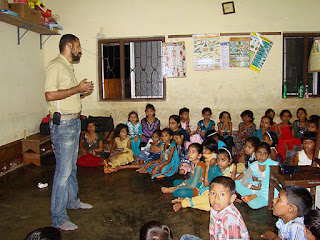 Posted by nirmal kulkarni at 9:00 AM No comments:

In a joint effort by the researchers Dr. Gopalakrishna Bhatta of Department of Biology, BASE Educational Services Pvt. Ltd, Bengaluru; Dr. K.P. Dinesh and Dr. C. Radhakrishnan of Western Ghats Regional Centre, Calicut; Mr. P. Prashanth of Agumbe Rainforest Research Station, Agumbe and Mr. Nirmal U Kulkarni of Mhadei Research Centre, Chorla Ghats have discovered a new species of limbless yellow striped caecilian from the Belgaum district of Karnataka which is part of the Western Ghats of India.

The new species Ichthyophis davidi is one of the largest known yellow striped caecilian from Western Ghats and is named in honor of Dr. David Gower, Department of Zoology, The Natural History Museum, London in recognition of his contributions to Indian caecilian studies. The common name suggested for the species is Chorla Giant striped Ichthyophis.

Systematically this yellow striped limbless amphibian is grouped in the genus Ichthyophis (meaning ‘fish like’) of the Family Ichthyophiidae under the Gymnophiona. The members of the genus Ichthyophis include both striped and non-striped caecilians in Western Ghats, these creatures are nocturnal and are found in forests and plantations.

Western Ghats, one of the global biodiversity hot spots supports 25 species of legless amphibians. Among the 25 species only five are yellow striped forms including the new species and are known from limited in distribution.

Posted by nirmal kulkarni at 8:59 AM No comments: 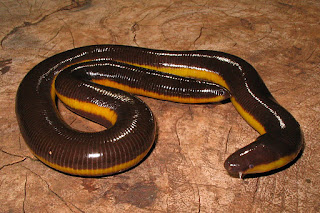 Posted by nirmal kulkarni at 8:54 AM No comments: